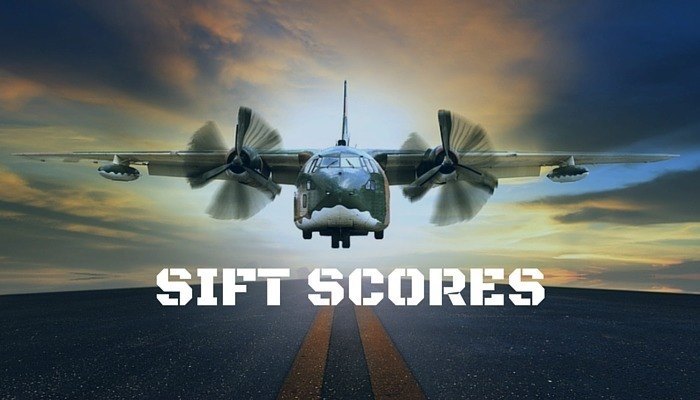 SIFT Scores and What They Mean

Your Selection Instrument for Flight Training (SIFT) score is your ticket to the next stage of Army Aviation training. In your entire lifetime, you are allowed to take the SIFT test on a maximum of two occasions. The first time you achieve a passing SIFT score, that’s it. You’re done. No chance to improve. And if you end up with two failing SIFT scores, you are barred from ever taking the test again. You need to ensure your SIFT score is the best it can be the first time.

Let’s take a closer look at what constitutes a passing SIFT score, an average Selection Instrument for Flight Training score and an excellent SIFT score. We will also consider how SIFT scores impact upon your selection prospects, based on reports from real Army pilots who have passed the SIFT.

How Does The Army Calculate SIFT Scores?

The exact method by which SIFT scores are calculated has been kept secret by the Army. The only valid information released on SIFT score calculation is that SIFT scores result from a compensatory testing method. This means that poor performance in one section of the SIFT can be offset by strong performance in another. The best strategy to ensure the highest possible SIFT score is to practice repeatedly with a quality SIFT study guide. This is the only way to get a feel for the different test sections and their requirements.

Will the SIFT Score requirements change in the future?

As things stand, 40 is the minimum Selection Instrument for Flight Training score needed to be considered for the next stage of Flight Training. However, the Army have officially stated that the passing score may be adjusted in the future. Any adjustment will take place based on data gained by comparing Aviation Training performance with SIFT scores. You can contact your local Army education center to receive confirmation of the scores needed at any given time.

How important is my SIFT Score?

It is more than possible you will come across advice suggesting that hitting the minimum SIFT score is all you need to worry about. This is a massive mistake. You need to aim as high as possible. Why? SIFT scores are one of the main metrics used to compare candidates for selection. All else being equal, your SIFT score could be the difference between being chosen for your dream Aviation role and being rejected.

The secrecy behind the process of SIFT scores is intentional and means that any information out there must be carefully considered. The fact that the Army publicly state the mean average Selection Instrument for Flight Training score of 50 is significant. Keep in mind, this isn’t the mean score for selection, just the mean for those who take the test. You want to aim for well above 50 to have the best chance of selection.

Let’s face it, if you want to pass, you’re going to need help.  Here are two really good study guides that could do the trick and we’ve even ranked them from best to second best:

The Complete SIFT Study Guide is the most up-to-date study guide on the market as well as being the cheapest. It has a full practice test as well as diagrams and examples throughout.

Some of the main advantages of this particular guide include a practice test section which is as close to the real SIFT test as possible (the SAT section uses a helicopter, for example, unlike other guides) and lots of useful information and external resources covering every section of the SIFT are provided.

You can check out The Complete SIFT Study Guide here.

SIFT Study Guide 2018-2019 is a little pricier than The Complete SIFT Study Guide and doesn’t offer anything more than what our #1 recommendation does. Therefore, stand to save yourself a couple of dollars AND get more.

Now that doesn’t mean we aren’t fans of this book. It does the job. But I’d only recommend picking this book up if you’ve already picked up The Complete SIFT Study Guide and want another crack at a practice test.

Which SIFT Scores Make It Through Selection?

If you want to know the SIFT score you need for selection, you’re out of luck. This information is not publicly available. Selection is also a complex, subjective process. There is no guaranteed number.

However, anecdotally, it seems that scoring a 60 or higher seems to have a strong correlation with being selected.

Which SIFT test Sections Impact SIFT Scores The Most?

As we’ve already said, the way in which SIFT Test scores are worked out is highly secret. The best approach is to study as hard as possible for each and every section, preferably using a SIFT study guide. However, based on logic and anecdotal evidence from SIFT success stories, there seem to be a few test sections that give you more bang for your buck with regards to helping your score.

This is a two-minute test section known for its simplicity. Very few SIFT test takers have reported having problems with it. Getting through this will help you achieve the bare minimum SIFT score but won’t help you stand out from the crowd.

A five-minute section containing 50 questions. Anecdotally, it seems to have more of an impact on your SIFT score than Simple Drawings, but less than some later sections.

The AAIT is the joint second-longest SIFT section and also one of the most challenging. It covers a mixture of theoretical and practical aviation knowledge. SIFT candidates have reported doing well on the AAIT, less well on other sections and still coming out with a respectable SIFT score. Well worth a lot of attention during your SIFT test preparation.

A ten-minute section containing 25 questions. Judging from anecdotal reports, the SAT seems to have a medium level of impact on your final SIFT score. One of the best and most enjoyable ways to score highly on the SIFT SAT is spending time with a quality flight simulator program. Although it might not have a huge impact on your final score, the SAT is very easy to study effectively for. On this basis, a strong SAT score is worth aiming for, not least because it can compensate for errors in another test section.

Despite its thirty minute length, the RCT does not seem to have a major influence on your overall SIFT score. It seems to be a test section you are required not to do badly on, rather than particularly excel in.

A forty minute test section and the first area of the SIFT to feature a variable number of questions. The algorithm used to determine your questions is intended to find and focus on your weak spots. One of the three test sections which seems to have the biggest impact on SIFT scores with the others being AAIT and MCT.

Although relatively short in length at only fifteen minutes, the MCT is one of the most difficult SIFT sections in terms of subject matter covered. Its difficulty, coupled with its variable number and type of questions, make it one of the three SIFT sections with the biggest influence on final score.

The SIFT test replaced the older AFAST test as the Army’s military flight test in 2013. The minimum pass score for the AFAST was 90 with good candidates getting 120 and top scores of around the 150-160 mark. Don’t try and compare AFAST and SIFT results as they have different formats and content. Roughly speaking, however, if you talk to someone who took the older test, their AFAST score of 90 is equivalent to a SIFT score of 40, and an AFAST score of 120 is something like a 55-60 on the SIFT.

The keys to getting a high SIFT score the first time are to practice properly with a SIFT study guide, understand time management during the test and to have a thorough theoretical knowledge heading in. Don’t rush in your preparation as the first passing score you get is the one you’re stuck with. Practice, practice, practice and ensure your SIFT score is a stepping stone to your dream Army Aviation career.